In the early ages human beings had expressed their feelings and thoughts through signs and physical expressions. Slowly they started to make sounds. In the different parts of globe the people used different type of phonetics to express their thoughts and to communicate to each other, this is the origin of the formation of different languages.

After phonetically developed new languages have born, next to this development they started to give difference shapes and structures to the phonetics. This is how the written script for any language had produced.

Then people wanted to record their life style, and their thoughts, this is the origin of the development of Printing Technology. 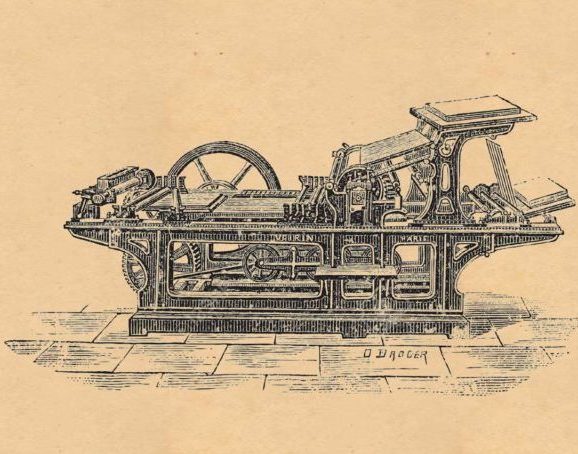 Due to the intellectual development of human beings they started to record their life style, feelings, imaginary in the walls of the caves they lived. They have carved on the walls of the cave in the form of images, then they started to carve on the stones, rocks and woods. This is the origin of printing.Then in later years they, started to write on the animal skins, cloths this is the origin and growth of printing technology.

Before 2000 BC Egyptians used some type of gross, grown in the banks of Nile River called “Pandikuram”. They had separated the gross in the layers and joined them and pasted them together, the processed output of this called “Papyrus” and they have used animal blood and the syrup extracted from some plants as ink, to write on the “Papyrus” with sharp sticks. Chinese wrote on Bamboo softs with the sharp instruments, apart from this they have used Silk Cloths and feathers and brushes for writing. Indians used Palm leaves, Barks, baniyan leaves and lotus leaves for writing.

In the ancient days, Tamils used palm leaves for writing, they collected leaves and made them in the uniform pieces, and processed them in some methods, and they have used sharp needles to write on them, these are called “Palm Leaves”, apart from this they have carved on the stones and embossed on the copper plates. Arabians used shoulder bone, leaves, stones and leather pieces for writing. Babylons used Clay Tablets for writing.

Except Egypt other central European countries traditionally used Skin as their writing material in between they have used “Papyrus” as a writing tool, as Papyrus spoils quickly, again they started using Skin as a writing material. Later Egyptians also used Skin for writing.
In Tamilnadu, Srilanka, Burma, and North India all these palaces most commonly used Pals leafs for writing.

Making of organic dye from coal tar was invented in 1856.

Initially, people wrote on wooden barks, Palm Leafs, Animal Skins, and they made Clay Tablets. Later people started to engrave the required letters, images, signs, symbols, on the stone and they had applied ink on them and made a copy of the same by pressing them on the other Objects.

The method of printing was first used in Eastern Countries. They started to engrave Symbols, Drilled the letters, and printed the images on the vessels, ceramics, etc.,

The Printing Technology was developed through printing emblems, Seals, Carving symbols, Copying from stone inscriptions, Wooden inscriptions from these methods it is slowly developed like making copies, paper currency, cards, and printing images for worship. After these kind of developments Movable type of letters was invented.
Separate Letters:
Pi. Sheng was the first person who invented the movable type during 1041 AD to 1049 AD when China was ruled by Ching Li.
Metal Printable Letters
The printing technology invented in China was spread to its neighboring country Korea. In Korea Metal type was in use during 1232 AD to 1241 AD. Korean and Chinese Printable letters were created in Korea. Bross printable letters were created and put in use in China during 15th Century AD.
John Guttenberg (Born in 1399 at Mainsil) first created separate letters in wood. To safe guard the letters created in wood from the external pressure, Guttenberg created the clear metal letters, which can be used for printing.
The Bible printed on parchment using the separate created by Guttenberg is one of the oldest book in the world. To prepare this Bible skin of 300 goats had been used. 36 lines were printed in each page of this Bible.

Meins in German is the birth place of Printing Technology. Guttenberg, Bastin and Scober altogether efficiently created the printing technology in 1455 AD.
In 1591 AD Angelo Rocca started to tie the letters used for printing together in a rope.
Perforation is the basic reason to make the Shank and Nicks in te printing letters. As making holes in the letters weakened the letters, Nicks had developed instead of making holes in the printing letters.
Next to the above development Type founding method has been modified scientifically. So, there were no need of attaching the printable letters using thread or string. In olden days Printers printed their unique Monographs or Cipers in their publications.
After Guttenberg’s death, within 15 years, Printing technology had spread from Sweden to Cicili, Spain, Poland in the western Christian world.
In the period of late 15th Century and early 16th Century the terms Type Founder, Printer, Publisher, Editor and Book Seller are used in almost same meaning without much differences, because, all the above works were carried out by a single person or an organisation.

The invention of Printing Technology in India

Mr. John Konsolves is a priest who taught the printing technology in India. He was called as the Father of Printing in India and Indian Guttenberg.
First Printing press was created in Meins of German in 1439 AD followed by in 1495 at Italy, in 1470 at France, in 1474 at Spain, in 1477 at England, in 1482 at Denmark, in 1483 at Sweden, in 1495 at Portugal, in 1553 at Russia and in 1553 at India.
First Printing Press in India was established at Goa in 1556 by the Portuguese Priests. One year after establishment of First press at Goa, other printing presses were established in 1557at Kolkatta, Kochin, Ambalakkat. Further printing press were established in 1578 at Punnalkayal and Vaippukkottai by Catholic Priests.
First book printed in India was Doctrina Christam a 16 page book on religious quiz, which was printed in 1557 at Kollam. This book was a translated book from Portuguese by the pries Mr. Henry Hinry quiz.
First edition of first and second volume of the book “Gnanapedas Kandam” written by a Catholic Priest De Nobili were printed in 1675 at Ambalakat. First Edition of third volume of this book were printed in the year 1677.
Tamil is the first language among other Indian languages which was created in written form,, translated, created in printable format, carved in wood, and printable letters were created and even first book printed and published was in Tamil.

Creation of Printing in Tamilnadu

In Tamilnadu, people expressed their intellectual thoughts, their proficiency in language, and literature through wooden barm, Palm leafs, stones, and in copper plates, this is the origin and development of printing technology in Tamilnadu.

It is natural that, bends and curves will occur when we write on palm leafs that’s why ancient Tamil letters had bends and curves in the script, and also they avoided to put dots on teh letters as it damage the palm leafs. Same method was followed in wile writing on the stone as the dot may damage the stone. Present format of Tamil letters were evolved step by step in course of time period from Palm leafs and inscription. The letter format in any language in the world are in three formats that is Pictograph, Line graph, and Wedge writing according to their writing style and appearance.

Even befor the invention of printing technology in Europe, Tamilians were used above mentioned writing methods in clays and weavers drew in the cloths.

Recent form of printing was introduced in Tamilnadu Christian Priests. The thought of spreading their own religion to the people is the basic reason and motivational factor for the creation and development of printing technology.

Germann Christian Missionary called Parthilomia Seagen Palgu Iyer (1683 – 1716) who came to Tamilnadu to do missionary service at Tharangampadi. He was the first person to establish Printing press at Tharangampadi in 1710. He translated New Testament in Tamil and printed and published them and also he printed and published Christian thoughts, in a hand notices and palm lets.

Holland Printing press was established in 1741 at Colombo, Srilanka by Ollantha Commercial Administrative group. In this press Mathews gospel translated by Paltheyus Priest was printed and published. It also corrected by many people. In 1742 on behalf of Ollan Government 4 Gospels were printed.

Llike tis Christians, they may be Catholic or Protestand, they were published hand notices, single page statements, religious quizes and explanations, translated books, and new science books. Apart from these publications they have introduced Monthly magazines, weekly magazines and dailies to spread religion and General Knowledge among people.

Christian invasion in India, Tamilnadu and Other places are the basic reason for the establishment of Printing Press. Due to their invasion Grammers and med easy in literary form, magazines was introduced, many linguistic literature and medical works had been printed and protected. New education system on par with Western Educaion System were introduced.

Eventhough spreading religion was the fundamental idea of Christian missioneries, they have introduced new departments to cope up with recent time.